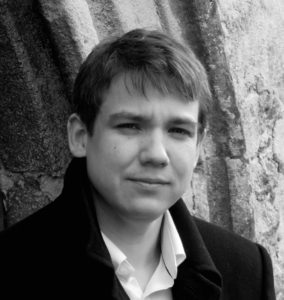 James Aitcheson was born in Wiltshire in 1985 and studied History at Emmanuel College, Cambridge, where he developed a special interest in the Middle Ages. He is particularly interested in the Anglo-Saxon period and the Norman Conquest, a time of tremendous change that proved to be one of the biggest turning points in English history. His novels are published in the UK, the US, Germany and the Czech Republic.

James’s debut novel, Sworn Sword, featuring the knight Tancred and set in the aftermath of the Battle of Hastings, was published in 2011. The first volume in the Conquest Series, it has since been followed by two sequels: The Splintered Kingdom and Knights of the Hawk.

His latest novel, The Harrowing, about five English refugees’ struggle for survival during the Harrying of the North (1069-70), was published by Heron Books, an imprint of Quercus, in 2016 and named by The Times as a Book of the Month.

James is currently working on his fifth novel while studying for his PhD in Creative Writing at the University of Nottingham. He is a member of the Royal Historical Society, the International Society for the Study of Early Medieval England, the Society of Authors and the Historical Writers’ Association.