In Our Time: Domesday Book For love, for honour and for vengeance

Knights of the Hawk: UK paperback 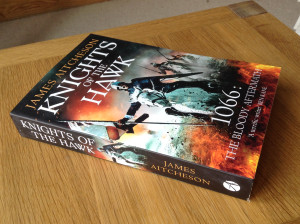 “The sword-path is never a straight road, but rather ever-changing, encompassing many twists and turns,” says Tancred in Knights of the Hawk. “All a man can do is follow it and see where it leads.”

Knights, the third novel in the Conquest Series, which is due to be published in paperback in the UK on Thursday 22nd May, sees Tancred journeying further afield than ever before, setting out across the length and breadth of Britain and making common cause with some unlikely allies as he strives for honour, vengeance and love.

Set in the autumn of 1071, Knights of the Hawk begins during the siege of the Isle of Ely, where the infamous English outlaw Hereward the Wake has gathered a band of rebels to make one final, last-ditch stand against the Normans. As King William’s attempts to assault the rebels’ island stronghold end in disaster, however, the campaign begins to stall. With morale in camp failing, the king turns to Tancred to deliver the victory that will crush the rebels once and for all and bring England firmly within his grasp. But events are conspiring against Tancred, and soon he stands to lose everything he has fought so hard to gain.

Look out for it appearing in a bookshop or a supermarket near you. As always, e-book editions are available on all platforms for the more technologically inclined. If you can’t wait until publication day to get a taste of what’s in store, you can read an extract from the beginning of the book.

And if you’re interested in finding out more about the setting and how the landscape might have looked at the time of the Norman Conquest, there’s an entry on Ely and the Fens in “Tancred’s England”, my historical guide to the kingdom c.1066. Don’t worry, there are no spoilers! As a special web-only bonus, there’s also a map of how the area would have looked in the Middle Ages before the marshes were drained, which unfortunately there wasn’t space to include in the book.

All three books (so far) in the Conquest Series:
UK paperback editions.

Readers in the US unfortunately have a little longer to wait before Knights is available, but in the meantime there’s The Splintered Kingdom to look forward to. Set in the borderlands between England and Wales, it’ll be published this August, and I’ll be revealing more about it in the coming months. Watch this space!