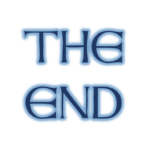 Thoughts on reaching ‘The End’

This week I’ll be writing what I hope will be the final scene of my latest novel – the first draft typescript is pictured below. With that in mind, I thought it would be the perfect time to reflect upon what reaching ‘The End’ means to me, to share some of my experiences and to offer some tips.

Firstly, getting to the end is rarely as dramatic or as definite a moment as is often popularly imagined. You can forget those film montages in which the writer types furiously through the night until, with the sun coming up, he gives a huge, contented sigh and types those two simple yet immortal words. This perfect moment of elation, exhaustion and fulfilment might look good on screen, but it hardly ever happens in real life.

Sometimes, it’s true, I do attack that final scene in a mad rush, but not always. Often it must be approached slowly, paragraph by paragraph, over several days. If you come at it too quickly, you risk scaring it off.

Sometimes you don’t even know you’ve reached the last sentence until you get there. It can catch you by surprise: you find yourself typing a sequence of words that you never intended but which just feel right.

At other times you know exactly the final phrase that you want to arrive at – maybe you’ve known for months already. In that case it’s especially important not to rush, but to work methodically and carefully. The End still has to be earned.

The joy of finishing can be short-lived. My experience is often one of anticlimax. I say to myself, ‘What now?’

A case in point is my second novel, The Splintered Kingdom. The words were flowing so quickly, so beautifully and easily and I felt so ‘in the zone’ that, after I’d typed that last sentence, I didn’t know what to do with myself. It was like coming back down from 200mph to a standstill in the blink of an eye. I had so much adrenaline that I desperately wanted to keep writing. But I had nothing more to say.

For these reasons, typing your final sentence isn’t always as satisfying as you feel it ought to be. What I’ve come to realise, after writing five novels, is that this is entirely normal. I no longer worry about it.

Pro tip #1: it’s about the journey, not the destination.

Another reason why The End isn’t necessarily as fulfilling as you might hope is that sometimes it turns out not to be The End after all. You can be in the middle of writing it when you realise it’s not quite what you had in mind. It’s perfectly okay to put in something provisional: a placeholder that will serve until a better idea comes along.

If this happens, it’s possible there’s a problem elsewhere in the story, or something as yet unresolved. Look for what might be missing: it’s possible that some final understanding or inner growth is still required on the part of your protagonist, for example. Resolve it. Then try again.

You don’t have to write the whole thing in one go. What I call my ‘first draft’ sometimes only contains the first 90% or so of the novel. I add the ending later, after reading through the whole thing and giving it a thorough edit, once I’m sure of the direction of travel. This happened with my current work-in-progress. (The ‘first draft’ typescript pictured above is, in fact, incomplete.)

It’s crucial to stress, too, that The End is never the actual end of the process. Despite what those film montages might suggest, the writer still has work to do before his novel is finished: redrafts to do, edits to make, early reader feedback to take into account. He’s close, but he’s not quite there yet.

To summarise: although writing that final sentence and completing a draft is something to celebrate, for me it somehow never quite turns out to be the big moment that people seem to imagine it is. It’s just another stage in the process.

And it should go without saying, of course, that you don’t have to actually type the words ‘The End’. Others might disagree, but I find it old-fashioned and unnecessary in most cases.

In most cases. In this one I’ll make an exception.