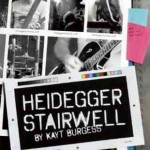 As 2012 draws to a close and the New Year beckons, I thought it was time that I unveiled some more of my top reads from the the past twelve months. So, following on from Barry Unsworth’s The Ruby in Her Navel and Jared Diamond’s Collapse in Part One earlier this month, here’s another of my favourite books of the year.

The winner of the 34th annual international 3-Day Novel Contest, Heidegger Stairwell is a remarkable achievement by Canadian author Kayt Burgess, and is, for me, the standout novel of 2012.

Music journalist Evan (neé Evie) Strocker is compiling a memoir chronicling his time growing up with the members of the world-famous indie-rock band Heidegger Stairwell, their rise to global stardom, and how, in his eyes, at least, their success is entirely due to his efforts behind the scenes. Although not a part of the band himself – he plays no instrument and his role is more of a groupie – without him, he argues, they would never have got to where they are.

At the heart of the novel is a coming-of-age story, as Evan – a transgender man coming to terms with his sexuality – tries to figure out his identity, to make sense of the world and, by writing this memoir, to impose a sort of order on it. But, as we soon learn, his account of events is not wholly reliable, and many of his claims are disputed by the other members of the band, whose voices (not to mention their many, often petty squabbles) are heard in the editorial notes that annotate the text at various points. The dysfunctional relationships within the band are brilliantly and believably drawn, and feel true to the rockstar type, and yet each of the characters is distinctive enough to prevent them from seeming mere clichés.

A complex and highly original novel, feverishly paced and told in captivating prose, I found Heidegger Stairwell very hard to put down, and was sorry to finish it, so compelling are Burgess’s characters, and so well-observed is the world that she conjures up. It’s a tremendous accomplishment – all the more so for having been composed in such a short space of time – and I eagerly await her next title.