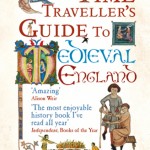 By James Aitcheson On 8 December 2011

With 2011 drawing to a close, I’ve chosen some of my favourite historically themed books of the past twelve months, both new releases and older titles recently discovered. Among my recommendations are works of both fiction and non-fiction, so with any luck there’s something in the list below to suit every taste. In no particular order, then, here are my personal picks of the year:

Historian Tracy Borman delivers a brilliant account of the years either side of 1066, as seen through a new and largely unfamiliar lens: namely that of Matilda, the wife and queen of William of Normandy. Although relatively little is known about her life, Borman weaves the few facts that we do have into an engaging narrative of the Conquest, along the way providing insights into eleventh-century aristocratic and royal life, and the complex political webs that the ruling elite spun across north-western Europe. A highly readable and fascinating introduction to the subject of the Conquest.

Following on from the success of her debut The River, Patricia Wastvedt’s accomplished and compelling second novel takes place primarily in the interwar years of the early twentieth century, focussing on the complex relationships between two families as they come to terms with the momentous political events of the age. The prose is beautifully crafted, filled with lyrical descriptions, a keen sensitivity towards the characters and their sometimes difficult choices, and a sense of poignancy at roads untravelled. A delight to read: moving, thought-provoking and highly recommended.

Concluding the story that The Forgotten Legion began, Ben Kane takes the reader back to Rome in the final years of Caesar’s dictatorship. The story follows the lives of three characters – two ex-slaves and an Etruscan haruspex or soothsayer – as they find themselves embroiled in the intrigues and conflicts of the time. The settings are vividly drawn and the moral dilemmas well explored as the characters are forced to decide where their loyalties lie. Also keep a look out for Kane’s latest, Spartacus: the Gladiator, which comes out next year.

From the pen of historian Ian Mortimer comes an in-depth and accessible study of fourteenth-century life, ideal as an introduction to the period, and also (I imagine) a terrific resource for any historical novelists of the later Middle Ages. Assuming the perspective of a recently arrived visitor from our own time, Mortimer explores the workings of medieval English society, with chapters on everything from the landscape to food and drink, from health and disease to the law. Mortimer is also known for his Elizabethan mysteries under the pen-name James Forrester, and indeed a sequel of kinds to this book, The Time Traveller’s Guide to Elizabethan England, is due next year.

Speaking of Elizabethan mysteries, this debut offering from S J Parris deserves a mention. Narrated by Giordano Bruno, renegade monk, philosopher and spy, the tale unfolds in 1580s Oxford against a backdrop of murder, intrigue and religious strife. Fast-paced and with a keen sense of the issues of the age, it also happens to be the first in a series. The sequel, Prophecy, is already out in paperback and the third volume, Sacrilege, is set to be released in spring 2012.

While not strictly a historical novel per se – Harris’ acclaimed thriller takes place in an alternate 1964, where Hitler won the Second World War – Fatherland is one of the most thrilling reads I’ve come across this year. What at first appears to be a straightforward murder investigation leads Kriminalpolizei detective Xavier March to uncover a conspiracy that runs to the very heart of the Nazi regime. Soon March finds himself in a race against time to expose the truth before the Gestapo catch up with him. If it sounds simple enough, think again. This is brilliantly constructed and thought-provoking stuff, crammed with twists and turns and with a denouement to remember.