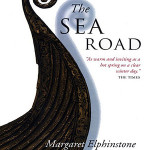 With the year drawing to a close, it’s time for an annual round-up of my favourite books of the last 12 months. As ever, my picks include a mixture of fiction and non-fiction, new and not-so-new releases – with any luck, something for everyone. So without further ado, here’s the first instalment of my top reads of 2013.

The slenderness of this novel, first published in 2000, belies its richness and its depth. Set in the Norse colonies of the North Atlantic around the year 1000, and taking the sagas as its inspiration, The Sea Road is the story of Gudrid, an Icelandic woman living on the edge of the known world, who was among the first travellers to and colonists of Vinland, in what is now often identified as Newfoundland. Lyrical and absorbing, told with real insight into the hardships of life in these difficult landscapes, as well great sensitivity towards the mores of the age, The Sea Road represents historical fiction at its finest, and is my pick of the genre this year.

The Spy Who Came in from the Cold
John le Carré
Penguin Classics, 272 pp., £8.99
Paperback

First published 50 years ago, John le Carré’s third novel is now rightly regarded as a classic of the spy genre, and remains just as readable and as relevant today. A taut psychological thriller full of deception, double-bluff and brilliantly conceived twists, it also highlights some of the difficult choices and moral compromises that often have to be made by those involved in the world of espionage. In Le Carré’s vision, there is no room for idealism; the secret services are seen often to betray the very principles they purport to defend, while the spy himself is presented as a solitary, cynical and unromantic figure, the victim of the very system he has served so loyally and for so long. This darkly compelling, fast-paced novel is an excellent introduction to the works of Le Carré.

In The Face of Battle, originally published in 1976, historian John Keegan examines the various ways in which warfare has evolved over five centuries of European history. Focussing on the battles of Agincourt (1415), Waterloo (1815) and the Somme (1916), he explores not just the physical, but also the psychological and emotional experience of the front-line soldier, analysing and comparing what motivated and inspired men in all three ages to take up arms, and how they were able to withstand the pressures and horrors of combat, whether ranged or hand-to-hand. Although perhaps not quite as revolutionary nowadays as when it first appeared, it nevertheless remains an eye-opening and informative read, and is my non-fiction choice of 2013. For a fuller review, see this blog entry, which I posted earlier this year.

Tagged with: John Keegan • John le Carré • Margaret Elphinstone • The Face of Battle • The Sea Road • The Spy Who Came in from the Cold