Now on sale in a (US) bookstore near you… In Our Time: Domesday Book

Today I’m launching a brand new section here on the website! Eagle-eyed visitors might already have noticed the new link on the menu bar above, nestled between Bio and Blog. Entitled Tancred’s England, the idea is to offer an insight into the history behind some of the key places featured in the Conquest Series, and to share some of the research that goes into the writing of the novels. 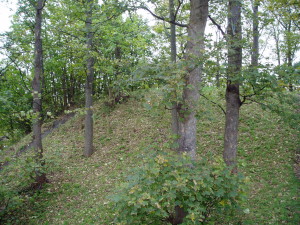 Baile Hill, on the western bank of the River Ouse, is all that survives of York’s second castle, constructed in spring 1069.

All of these are places that I’ve visited myself in order to try to understand the landscapes in which Tancred would have lived and fought. In each entry my aim is to give an overview of the place’s history, from the early Anglo-Saxon period through to 1066, and to suggest where you can go – both online and in person – if you’re interested in discovering more.

So far you’ll see that I’ve posted information about three locations, and there will be more to follow in due course. To begin with I’ve chosen to feature the two great Anglo-Saxon cities of York and London, as well as Ely and the Fens – where the English outlaw Hereward and his allies made their stand against King William in 1071.

The valley of the River Teme to the north of Knighton, not far from Tancred’s fictional manor of Earnford. Taken from Offa’s Dyke Path, looking north-west.

On the Ely page you can also find a map of the surrounding area, which I hope helps to illustrate the geography described in Knights of the Hawk. Unfortunately there wasn’t space to include it in the book, and so I present it to you now.

I’ll be expanding the Tancred’s England section and adding fresh content to each of these pages in the coming months, with entries on Durham, Bristol and the Welsh March all in the works. So keep checking back from time to time to see what’s new, and if you have any suggestions for things that I could add or which you’d like to know more about, please get in touch with me via the Contact page.