England’s largest and wealthiest city had a long history before the Normans arrived. Originally founded c.AD 50, Londinium was the capital of Roman Britain and a flourishing city, but after the collapse of imperial authority in the early fifth century, it fell into decline and was largely abandoned.

The Roman walls encircled an area of roughly one square mile on the north bank of the Thames, between where St Paul’s Cathedral and the Tower of London now stand. When Anglo-Saxons first settled in the area in the sixth and seventh centuries, however, they did so largely outside the Roman walls, on a site a short way to the west, known as Lundenwic, which was centred on the modern Strand. (Later this would become known as Ealdwic [Old English: “the old settlement”], a name that has survived today in the form Aldwych.) Archaeological and documentary evidence both suggest that already by c.680 this settlement, which was probably undefended save for a ditch marking its boundary, had grown into a thriving port, through which slaves were traded and pottery and glass imported from the Continent. 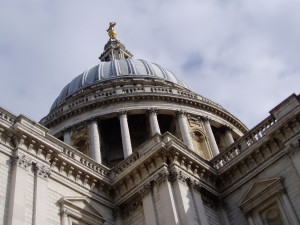 The modern St Paul’s Cathedral, London, which dates from the 17th century. The original church, or its successor, was destroyed in a fire in 962 but rebuilt in the same year. The replacement lasted barely a century before it too perished in another fire in 1087, after which the Norman cathedral was begun.

The old Roman city was not entirely neglected during this period, though. An excavation in 2008 uncovered a seventh-century Anglo-Saxon cemetery in Covent Garden, and the first church dedicated to St Paul was founded in the city in or around 604, when Mellitus was consecrated as bishop for the East Saxon kingdom in which London lay. Whether this church stood on exactly the same site as the present St Paul’s Cathedral, as is often assumed, is not known, but it suggests the existence of a substantial ecclesiastical community within the old Roman city, so it was clearly not uninhabited.

It wasn’t until after 886, when Alfred the Great, king of Wessex, captured the city from the Vikings, that the walled city was fully re-occupied and its defences refurbished. To distinguish it from Lundenwic, which archaeological evidence suggests was abandoned at around the same time, this new settlement is often referred to by historians as Lundenburh – the “burh” element signifying a fortress. Anglo-Saxon writers, however, were rarely as consistent in the names that they applied to places, and referred to London in various other ways, including Lundenceaster and Lundene (the latter being the form that I’ve chosen to use in my novels). 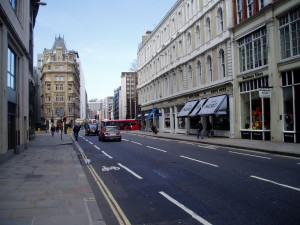 Looking west along Newgate Street, which here follows the line of the ancient Watling Street, the Roman road (maintained throughout the Middle Ages) that connected Dover, via London, to the Midlands.

Development continued slowly up to around 950, from which time it began to accelerate. By the time of the Norman Conquest, ribbon development was taking place along the key approaches to the city at Aldgate, Bishopsgate and Aldersgate. It’s impossible to gauge exactly how many people were living in and around London at this time, and estimates vary, but it seems likely that its total population was somewhere between 12,000 and 20,000. Finds from the late Anglo-Saxon period include pottery from France and the Rhineland, and silks from as far afield as Byzantium and China, demonstrating the extent of the trade network to which London belonged, and the wealth that was flowing into the city.

In 1066, the city became the focus of resistance against the Normans in the weeks after the Battle of Hastings. When news of Harold’s death reached London, the the witan – the leading nobles of the kingdom – acclaimed Eadgar Ætheling as king. The last of the ancient Saxon royal line, Eadgar arguably had the strongest claim to the throne in 1066, and yet earlier that year, after the death of his great-uncle Edward the Confessor, he had been passed over in favour of Harold. 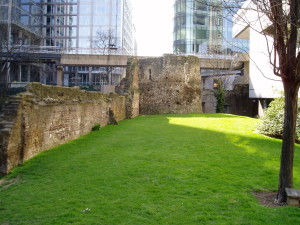 The walls pictured here date to the later Middle Ages, but they followed the same course as the much-repaired Roman and Anglo-Saxon walls. This section stands next to the Museum of London, just off the modern street known as London Wall.

However, his reign was short-lived. Instead of trying to storm London’s substantial defences, William chose instead to march in a circuit through the shires to the west, ravaging the city’s hinterland and receiving the submission of many prominent Englishmen along the way, including Archbishop Stigand of Canterbury and Earls Edwin of Mercia and Morcar of Northumbria. Eventually the city, the Ætheling and his supporters were isolated and forced to surrender. Eadgar was received into William’s court and treated with honour, but a couple of years later he fled to Scotland where he began to raise an army that would help him regain England. The events of his rebellion against the Normans are of course described in Sworn Sword and The Splintered Kingdom. 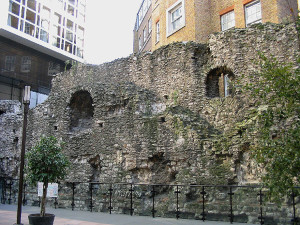 Still standing after centuries: a section of the London’s city wall, just off Coopers Row, 200 metres north of the Tower of London.

In time, the Normans would build three castles in London. The first – which later developed into the Tower of London that we recognise today – was built in the immediate aftermath of William’s capture of the city, by the river in the south-east corner of the city walls. Originally built in timber and to a motte-and-bailey plan, it was soon upgraded. Construction of a stone keep – the White Tower – began in c.1078 and was complete by 1100. Of the other two castles, known as Montfitchet’s Tower and Baynard’s Castle, which were both built in the following decades in the vicinity of St Paul’s, nothing now remains.

If you’re interested in finding out more, the Museum of London has galleries containing finds relating to the history of the city from its foundation through to the seventeenth century, and is free to visit. The Museum itself is located in what was once the north-west corner of the walled city, and there are several standing sections of the medieval defences close by. Another section that is particularly well-preserved is that immediately to the north of the Tower of London, off Cooper’s Row (pictured above). There you can appreciate the scale of the defences, and also see the original Roman terracotta layers upon which the later medieval walls were raised.

With special thanks to Dr Michael Bintley of Canterbury Christ Church University for his walking tour of early medieval London as part of the London Anglo-Saxon Symposium 2014.