Currently viewing the tag: "Harrying of the North" 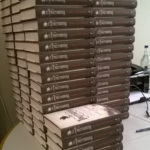 Today’s the day that The Harrowing is officially released into the big, wide world! Almost three years have passed since I first began working on it, so to see it finally in bookshops is hugely exciting. 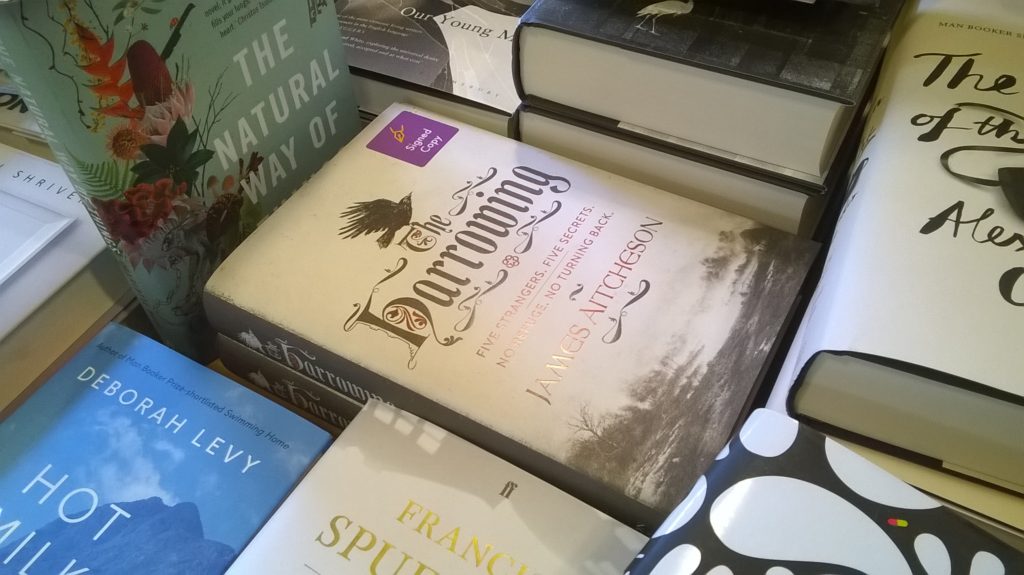 Signed copies of The Harrowing in the London Review Bookshop.

I’d like to take the opportunity to thank everyone at Quercus Publishing who has worked on the novel over the course of its long journey from manuscript to finished product, including my editors Jon Watt and Stefanie Bierwerth, as well as Kathryn Taussig, Olivia Mead and Jeska Lyons, whose hard work has been invaluable.

Signed copies of the book are already available in several bookshops across central London, including but not limited to Foyles, Waterstones Piccadilly, Goldsboro Books and the London Review Bookshop. I’ll be continuing my book tour over the coming weeks with events across the country. 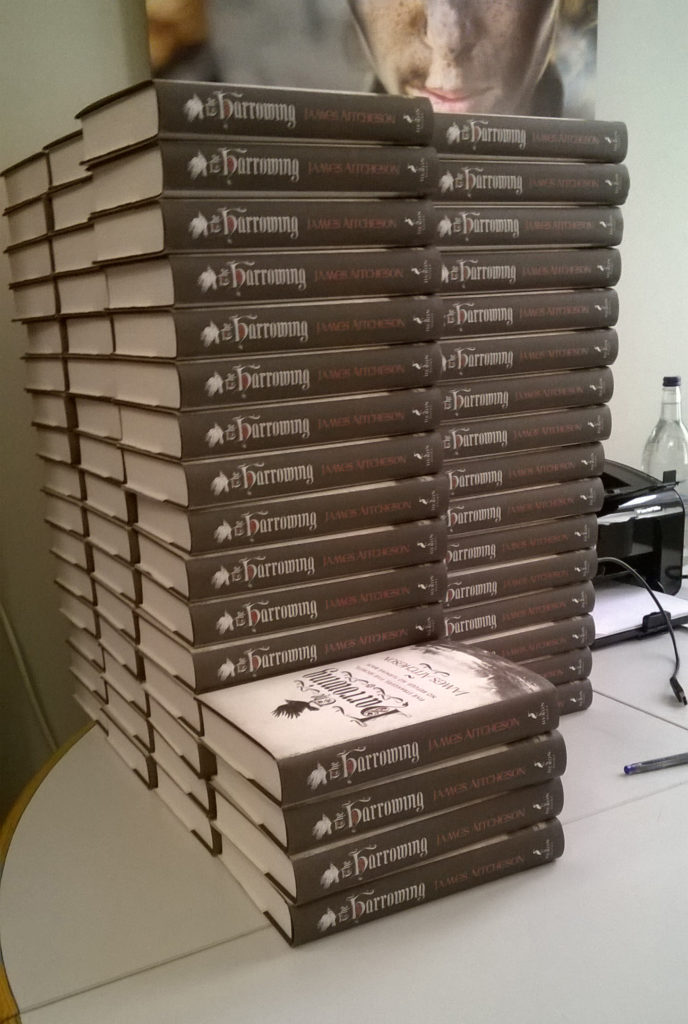 The Harrowing is also available online through all the usual retailers, and of course is published in digital formats as well to meet your e-reading needs. If you’re based outside the UK and would like to get your hands on a copy, I recommend ordering from the Book Depository, which is based in England but offers free worldwide delivery. 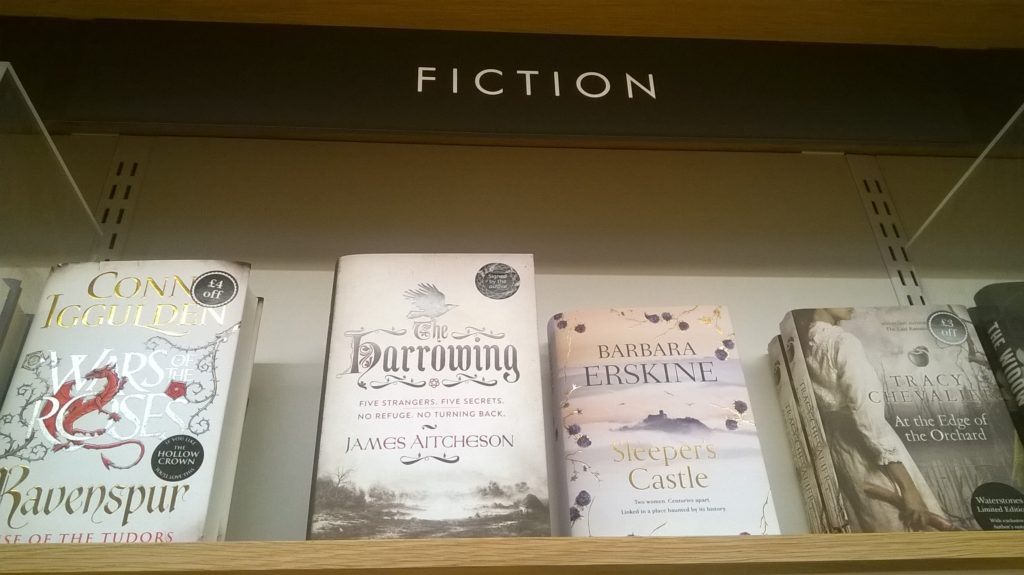 The Harrowing prominently displayed in the hardback fiction section at Waterstones Piccadilly.

I hope you enjoy reading The Harrowing as much as I’ve enjoyed writing it, and I look forward to hearing your comments and feedback over the coming weeks and months! Feel free to get in touch with me at any time, either by emailing me via the Contact page, or through Facebook and Twitter.

Tagged with: hardcover • Harrying of the North • Heron • Quercus • The Harrowing 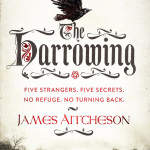 It’ll be available in hardcover and as an ebook, courtesy of my wonderful new publisher Heron Books, an imprint of Quercus Publishing. 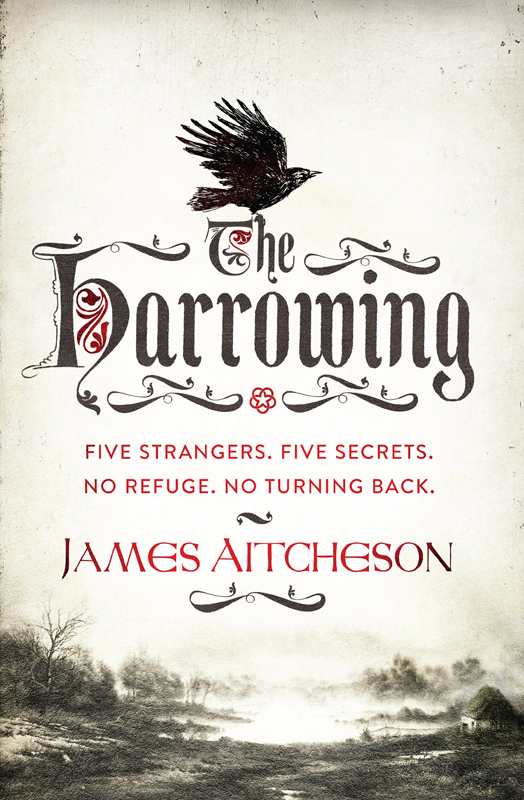 Originally conceived as “The Canterbury Tales meets Cormac McCarthy’s The Road“, the novel has been almost three years in the making, but I feel – and I hope you’ll agree when you come to read it – that it’s been worth every moment spent working on it.

Set amidst the turmoil of the Norman Conquest during a particularly brutal episode known as the Harrying of the North, The Harrowing centres upon five English refugees fleeing the devastation who are forced to band together for survival.

You can find the full synopsis here. I’m currently in the process of arranging my book tour for the summer, so keep checking the Events page to see when I’ll be visiting a bookshop, library or literature festival near you!

Tagged with: Harrying of the North • Heron • Norman Conquest • Quercus • The Harrowing 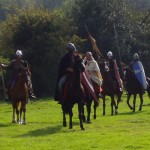 The other point of view 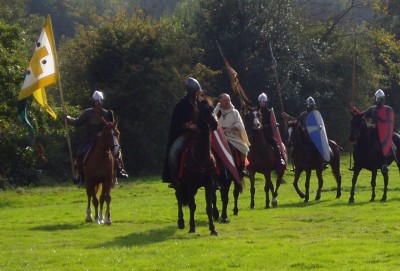 One of the most common questions that readers of Sworn Sword ask me is why I chose to write from the Norman perspective, rather than that of the English, as might be expected. In fact this was a decision that I made very early on in the novel’s development, when it was little more than a bundle of research notes and half-formed plot ideas.

I had long been fascinated by the Conquest, and I knew that what I wanted to write about were the years that followed the Battle of Hastings: a turbulent period as the Normans fought to consolidate their gains and subdue a country rife with rebellion. (The story of one of those rebellions, led by the dispossessed prince Eadgar, forms the backbone of the novel.) However, while the theme of the tragic-heroic struggle of the Anglo-Saxons against their foreign oppressors seemed to me very familiar, the Norman version of events was not generally as well known. Straightaway, then, I started to think about giving the tale of the Conquest a fresh twist, by telling it from the “other” point of view.

Every story has two sides. One man’s freedom fighter is another man’s insurgent. These sayings are so familiar as to have almost become clichés. By blurring the traditional distinction between the “good” English and the “evil” Normans, I hoped to show the period in a different light, to challenge readers’ sympathies and preconceptions. So far as I could see it was an angle that few authors had taken before, which made this a subject ripe for exploration.

Even so, to get the modern reader on the side of the foreigner is no easy task. Why this should be isn’t completely clear. After all, it goes almost without saying that the Englisc of the eleventh century are not at all the same people as the English of the twenty-first. Moreover, were it not for the Normans, we would not speak the language we do today, our systems of law and governance would be entirely different, as so too would our cultural heritage, since all are based on the foundations that they laid. The world we live in today owes as much, if not more to the Normans than it does to the Anglo-Saxons.

None of that, of course, is to deny that the Norman invasion was a brutal affair, or that it resulted in tremendous suffering for many thousands of people. In particular the campaign later known as the Harrying of the North, by which King William devastated Yorkshire in the winter of 1069-70, is testament to that. Nonetheless, to suggest that the Normans were universally bad men would be a gross oversimplification. Undoubtedly some came to England purely for self-serving reasons – out of desire for land and wealth, blood and glory – but I believe that many were also complex human beings who truly believed in the righteousness of their cause.

William of Normandy’s case for war in 1066 was built on two main pillars. The first of those was that the claim that he had been promised the succession by King Edward the Confessor in 1051. The second was that in c. 1064 Harold Godwineson had sworn on holy relics to uphold his right to the throne: a promise that he had subsequently broken when he himself seized the crown upon Edward’s death in January 1066. As far as the invaders were concerned, then, Harold was a perjurer and a usurper who had no right to the English crown. Worse than that, he was effectively made an enemy of God after Pope Alexander II gave his approval to William’s proposed invasion and sent him a consecrated banner under which to fight. To a Christian knight riding in the Conqueror’s army, there would have been little question that he was on the side of justice. William was the rightful king, anointed by God, and any who rose against him were to be crushed.

However, as Tancred finds out over the course of Sworn Sword, it is often difficult to tell who is right and who is wrong in any given situation. There are times when men will betray their principles in noble causes; on other occasions they will hold steadfastly to them even if it means the destruction of all that they hold dear. Englishmen will fight in the service of Normans and vice versa, to the extent that the “sides” become blurred and it becomes harder to talk about this period as a simple conflict between the two peoples, still less as one of good versus evil.

In reality the Conquest was a complicated and morally messy affair, and by offering a different perspective this is what I hope to show in Sworn Sword.

Tagged with: 1066 • Harrying of the North • Norman Conquest • point of view • Sworn Sword • William the Conqueror