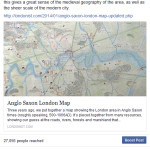 Recently I came across an article from Londonist, the online magazine, that featured a map of Anglo-Saxon London drawn by Matt Brown. It’s a terrific piece of work that depicts the geography of the area during the early Middle Ages and gives a sense of the sheer extent of the modern city. If you haven’t seen it yet, it’s definitely worth checking out. You can even download the full map to view offline.

On Thursday evening I posted a link to the map on my Facebook page. The following morning I found out that it had been shared by 19 people and reached an audience of 1,880. And that was just the start.

At the time of writing this article another two days later, the link has so far been shared no less than 171 times, and has been seen by more than 27,000 people on Facebook (see screengrab below). 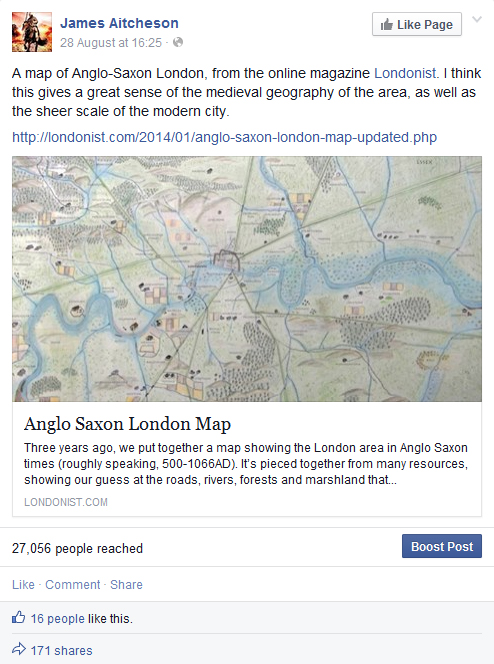 Screengrab taken from my Facebook page (31 August 2014) of the original post that included the link to Matt Brown’s map of Anglo-Saxon London.

In the grand scheme of things, maybe 27,000 isn’t a lot. What was impressive was the speed with which the link spread, firstly as my own followers shared it, and then as it was passed on by their friends, and their friends in turn, with people adding comments at each stage as they located places where they’d lived or grown up.

What’s great is that there are obviously a lot of people out there who are interested in London’s history. Not only that, but everyone who shared the link clearly saw within the map a personal connection that brought the history to life and gave it meaning for them.

For anyone who’s interested in finding out more, Matt’s written other articles for Londonist exploring how London’s rivers and boroughs got their names, which are well worth a read. (Clue: most of them derive from pre-Conquest, Old English roots, and some are older even than that.)

And I’ve written my own piece on the history of Anglo-Saxon London: a whistlestop journey through the centuries, following the city’s evolution from the end of the Roman period to the construction of the Tower of London after the Norman Conquest.