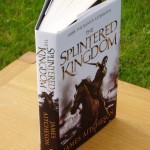 By James Aitcheson On 8 September 2012

First copies of The Splintered Kingdom arrived recently and look amazing, as I hope you will agree. Although of course the words contained within its cover and even the jacket design are now very familiar to me, seeing the finished book in the flesh, so to speak, is still a tremendous thrill. I’m looking forward to spotting it on bookshelves when it’s published in just a few days from now, on Thursday 13th September. 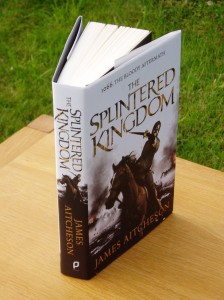 Set one year on from the end of Sworn Sword, it once more features Tancred, who has been rewarded for his exploits with a lordship on the turbulent Welsh Marches. But as the enemy stirs, his hard-fought gains are soon placed in peril. Under siege on all sides, the Norman realm begins to crumble, leading Tancred to face his sternest challenge yet. It will be either his chance for glory, or his undoing.

If you fancy a sneak preview of what’s in store, the synopsis and even a downloadable extract from the novel (PDF) can be found here.

I’ll be launching the novel with several events this coming week, starting with a talk and signing in Marlborough in Wiltshire on the evening of Tuesday 11th. Hosted by the White Horse Bookshop, who organised a highly successful signing last year on the publication of Sworn Sword, this will be an exclusive opportunity to get your hands on the book before it goes on nationwide release two days later.

Then on the evening of Friday 14th, I’ll be continuing the book tour with a talk at Waterstones in Salisbury. I’ll be discussing what inspired me to write about the Norman Conquest and how I go about my research, and giving readings from the new novel. That’s followed by a signing session the following morning, on Saturday 15th, at the wonderful Cotwold Bookstore in the picturesque town of Moreton-in-Marsh in Gloucestershire.

The following week, I’ll be attending History in the Court at Goldsboro Books in London along with a host of other writers of historical fiction and non-fiction. Now in its second year, this event is a great opportunity to mingle with your favourite authors and other fans of historical writing.

Full details of these and all my other upcoming signings, talks and festival appearances, including start times and how to obtain tickets, can be found as always on my Events page. I’m adding new dates to my calendar all the time, so if you can’t make it to any of those currently listed, keep checking back to see if I’ll be appearing soon in your area. 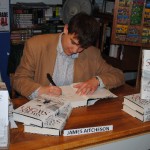 August has been a busy month, with the launch of Sworn Sword followed by a string of interviews, events and signings. So far the tour has taken me from Cambridge to London, the Cotswolds, Marlborough and Salisbury – and that’s just the beginning. Here’s a selection of the latest photos: 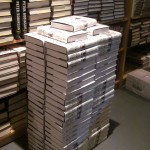 A stack of Sworn Swords, signed, lined, dated and ready to go on the shelves at Goldsboro Books in London.

Signing copies at the Cotswold Bookstore in Moreton-in-Marsh, Gloucestershire. 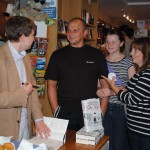 Speaking to interested customers about the novel at the Cotswold Bookstore. 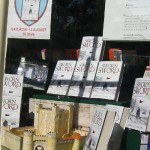 The Sworn Sword window display at the Cotswold Bookstore, complete with castle. 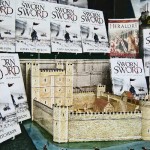 Another view of the window display at the Cotswold Bookstore. 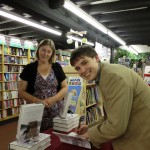 Signing books at the White Horse Bookshop in Marlborough, Wiltshire. 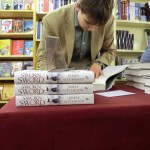 Working my way through a pile of copies at the White Horse Bookshop. 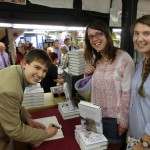 Customers queueing up to buy Sworn Sword at the White Horse Bookshop. 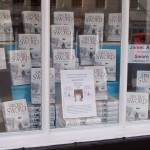 Window display for Sworn Sword at the White Horse Bookshop.

Many thanks to my hosts for these events: to the friendly folks at the Cotswold Bookstore in Moreton-in-Marsh, Gloucestershire, for not only providing freshly baked honey cakes but also creating the wonderful window display seen above, complete with medieval castle. Check out their blog for details of future signings, including one with Panama Oxridge, author of the ingenious novel Justin Thyme.

Especial thanks also to the White Horse Bookshop in Marlborough, Wiltshire, who last week put on a fantastic and well attended evening signing session and supplied both customers and author with wine. They’ll be supporting the Marlborough LitFest, where I’ll be appearing as part of the Wiltshire Writers panel on Friday 23 September.

For further news of signings, talks, readings and festival appearances, take a look at my Events page. More dates are being added all the time.

The latest addition to the list is a talk at the Durham Book Festival on Friday 21 October. Returning to the place where Sworn Sword – and Tancred’s journey – begins, I’ll be speaking about the novel’s connection to the city and more generally about my inspiration for the series, and what particularly fascinates me about the Norman Conquest.