Features in: The Splintered Kingdom; Knights of the Hawk. 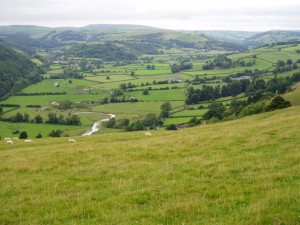 The valley of the River Teme to the north of Knighton, not far from Tancred’s fictional manor of Earnford. Taken from Offa’s Dyke Path, looking north-west.

One of the great problems faced by the Normans in the early years of their occupation of England was that of the turbulent Welsh frontier.

Throughout the Middle Ages, the default land-boundary between England and Wales was largely represented by Offa’s Dyke (Welsh: Clawdd Offa), an earthwork traditionally thought to have been built by the eighth-century Mercian king whose name it bears. Stretching for 64 miles (103 km), for much of its length it consists of an earthen bank 10 metres wide, with a ditch on the Welsh side 2 metres deep and 4 metres wide.

Offa (reigned 757-796) was the pre-eminent Anglo-Saxon king of his day, ruling and having overlordship over most of England south of the Humber Estuary, with the exception of the kingdom of Wessex. He is credited with building the Dyke by Asser, a churchman and chronicler writing a century later, and there has been no real reason to doubt this assertion. Recently, though, radiocarbon evidence from a section of the Dyke near Chirk has given a probable construction date of between 430 and 652. It’s possible that Offa did not build the entire dyke from scratch, but rather consolidated, reinforced and connected together existing structures from earlier eras. 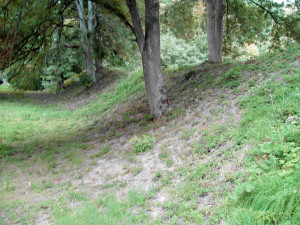 Offa’s Dyke, immediately to the north of the visitor centre at Knighton, Powys.

Why was the Dyke built? The lack of any evidence for timber structures such as palisades, walkways, forts or guardhouses suggests that it was never permanently garrisoned or used primarily as a defensive barrier. Instead it seems to have been intended from the start to delineate the respective lands of the Mercian king and his Welsh counterparts, and to make it difficult for Welsh raiding-parties to drive stolen livestock back into their own territory.

For all that, though, the Dyke was never a fixed frontier, and populations moved in both directions. Before the Conquest there were Anglo-Saxons living to its west at Radnor (Powys), and Welsh to its east, for example at Ewias and Archenfield (Herefordshire). Kings and local magnates on both sides were always looking to gain territory where they could. Raids by the Welsh were a perennial problem, and dissidents and exiles from England, both before and after 1066, often turned to the Welsh for support in their struggles.

For these reasons it became vital for the Normans in the early years of the Conquest to set about securing the region, in order that they could concentrate their efforts on fighting bigger threats elsewhere. From 1067 onwards – within a year of their invasion of England – they were already launching their first expeditions into Wales, annexing portions of the country and seeking to destroy certain Welsh kings whom they perceived as threats, occasionally installing friendly client rulers in the place of hostile potentates.

William I delegated overall responsibility for the borderlands to his long-standing friend and occasional deputy, William fitz Osbern. From his base at Hereford, Fitz Osbern immediately went on the offensive, seizing territory from the southern Welsh kingdom of Gwent, and established several castles along the southern march, most notably at Chepstow (known to the Normans as Estrighoiel).

View from Shrewsbury Castle, looking west into Powys. The first castle at Shrewsbury was established probably by 1068, under the control of the castellan (later Earl) Roger de Montgomery.

Earldoms were established at around the same time at Shrewsbury and Chester, and all along the borderlands castles were erected as Norman barons settled upon the land. The March has the greatest concentration of motte-and-bailey strongholds anywhere in Britain – an indication of the measures taken by the invaders to pacify and secure the region – and the earthworks of many of those early castles can still be seen today.

Quickly, then, the region began to be recognised by the Norman as a military buffer zone against invasion, distinct from the rest of England. Already by the time of Domesday Book (1086) a name had been coined for this district: the March of Wales (Latin: Marchia Wallie) and the term gained currency over the following century.

In time, the Marcher lordships of Hereford, Shrewsbury and Chester would come to enjoy a uniquely semi-independent status. Although men who held such honours remained vassals of the English king, legally their lordships lay outside of the kingdom, and were therefore not subject to the king’s laws. As a result, they were able to exercise quasi-regal powers in the regions under their jurisdiction, building castles, prosecuting wars and establishing markets without being required to seek royal consent. The precedents for such wide-ranging powers were set in the chaotic years immediately after 1066, when William I was forced in large part to rely on his deputies around the kingdom to take care of their own local difficulties while he pursued the greater war against Eadgar Ætheling and his allies. 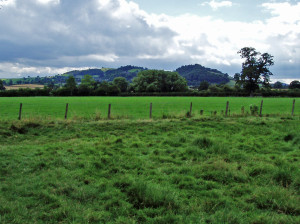 View towards the 13th-century Montgomery Castle, Powys, from the north-east. The original motte-and-bailey castle was built at Hen Domen a short way to the north.

In the 1080s and 1090s, with rebellion in England having subsided and the threat of invasion from overseas having receded, the Normans were able to concentrate their efforts on their western frontier, and began pushing ever further into Wales. These victories proved to be short-lived, however, and a series of rebellions soon forced the Normans into retreat. Although over the next two hundred years the Welsh kings were frequently forced to submit and swear their allegiance to their more powerful counterparts in England, it wasn’t until the late thirteenth century that Wales was finally conquered by Edward I.

Nowadays, the Welsh March can be explored by following the Offa’s Dyke Path, which was made a National Trail in 1971. 177 miles long, it stretches from the Severn Estuary to the Liverpool Bay: much longer than the Dyke itself and taking in the whole of the borderland. For more information about the Path, and the visitor centre at Knighton, visit the National Trails and Offa’s Dyke Association websites.